Despite coming up well short of our goal in this campaign, I’m proud of what we were able to accomplish in a very short period of time. Thanks are due to all of my supporters across Minnetonka, the folks who came to meetings and helped get an organization in place extremely quickly, and everyone who heard their doorbell ring and was willing to open the door to the winter and talk about the issues with me for a few minutes.

Next steps? We have some paperwork to take care of, and my family and I need a little bit of rest. But the challenges we face aren’t going away, and neither has my desire to meet them and make sure our community remains a strong, safe, vibrant place to raise a family.

Let’s work on that together. Onward!

By normal standards, this election cycle has been short — just about two and a half months. But we’ve come a long way since the At-Large B seat on the City Council became vacant and the special election was announced. We’ve had forums, meetings, doorknocks, phone calls, mail, and all the things that a regular election has, just compressed into a really tight timeframe. It’s Valentine’s Day –Election Day is finally here!

This is what it’s about, folks: learning about the candidates, tuning out the spin and last-minute tactics, and making choices about the future of our community. I hope to earn your support today, and will be posting updates throughout the day.

Thanks to everyone who turned out for precinct caucuses last night, and to the many folks who listened to the pitch for the City Council special election in precincts in SD42 and SD43. Turnout looked great and it was great to talk to so many committed voters already watching the Council race closely.

As I told many folks last night, I love getting and answering late-night emails about the race – so make sure you have the information you need, and make sure you get out and vote on Tuesday!

A note from Steve Simon

This note went out to our email list just now:

My name is Steve Simon and I represent your neighboring communities, Hopkins and St. Louis Park, in the State Legislature.

Our communities work best for the people when elected officials work together, communicating well with each other across all levels of government. To that end, I am writing to urge you to support Joe Bodell in the upcoming special election for the Minnetonka City Council. Joe’s awareness of the challenges and opportunities facing Minnetonka, Hopkins, St. Louis Park and the surrounding communities has inspired him to look for new solutions to keep our neighborhoods strong and retain the natural beauty of the area.

I’ve known Joe Bodell since the 2006 election cycle, when we worked together on a gubernatorial campaign. He is an energetic, enthusiastic and knowledgeable citizen concerned about the future of the western suburbs and the state of Minnesota.

You can help bring a new leader to the Minnetonka City Council, who will work to maintain and improve the western suburbs’ quality of life as we move together into the future.

I’m proud to earn Rep. Simon’s support, and I look forward to collaborating with him and leaders across the west Metro on issues that affect all our communities equally.

From A New Supporter

We received this note today on the campaign’s Facebook page from Minnetonka resident Kathy Peterson:

Yeah…finally someone who is running for council that has a understanding of the issues of our aging community and the impact that has on it. I totally agree we need to make it easier and enticing to upgrade all the old existing homes in Minnetonka to draw new families into our community. Right now we have 26% open enrolled students in our schools. Those are students who are using our school system whose families don’t pay local taxes to support out community. They also don’t have a vote when we need a referendum passed to support out schools. These families do not have a vested interest in our schools or community, they are simply using our schools. Why not build our community to support our schools? I realize that most of Minnetonka is developed, but so many of our homes sit on large lots with small homes on them, particularly in our Groveland neighborhood. The city makes it really difficult and very costly to make remodeling possible. You can count on my vote on the 14th. Thank you

Thank you for your support, Kathy!

We’ve updated the site to include a list of friends and neighbors from around Minnetonka who are supporting Joe’s campaign! Add your name here – the list is growing daily!

The League of Women Voters held a candidate forum last night at Minnetonka City Hall. It was a great opportunity for voters to hear directly from all the candidates at once, and for Joe to hit home on all the issues upon which this campaign is based: a healthy economy, strong communities, and strong families.

That goes for all families. Have a look at the great question regarding support for a Domestic Partnership ordinance in Minnetonka (in randomized order, Joe ended up fourth in line on this question):

It’s about leadership, and doing the right thing for our community and our families — all families — can’t wait.

You can watch the entire debate here, if you have an hour and a half to spare. Thanks to LWV for hosting a great event! 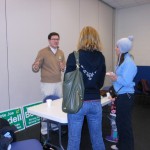 Glen Lake-area resident Grace Sheely set up a great meet-and-greet event this weekend for some of the candidates in the race. It was a great opportunity to meet with residents and talk about their concerns and the campaign, and folks didn’t disappoint, despite frigid temperatures!

There’s an interesting nugget buried in the piece:

Meanwhile, realtors are looking to Generation Y—those born in the mid-1980s—to replace Baby Boomers in the housing market. But Generation Y, thus far, isn’t cooperating, Holds said. People from Generation Y tend to wait for the house they want rather than buy the house they can afford, Holds said, and they’re also reluctant to commit to mortgages in a shifting job market.

“Generation X can’t make up the buying power of the Baby Boomers, but Generation Y can,” Holds said. “We’re trying to get this bubble moving, but they just aren’t buying houses. It’s just a completely different attitude, and we’re struggling with that.”

This is exactly what Joe is talking about on the campaign trail: we need to start building city policies that focus on younger buyers in Generation Y, determining what they’re looking for in a home, and fast-tracking projects that build those things, whether in new construction or renovations. Bringing young families to town is not just a “nice-to-have”, it’s an absolute imperative if we want to keep our neighborhoods and economy stable.

Joe and his wife Elizabeth are members of Generation Y. He knows what the younger generation is looking for in first and second homes, and will translate that into working policies on the City Council.

Thanks to our friends and supporters who braved a chilly night Tuesday to head out to the Hopkins VFW for a fundraiser supporting Joe’s campaign. Including this guy: 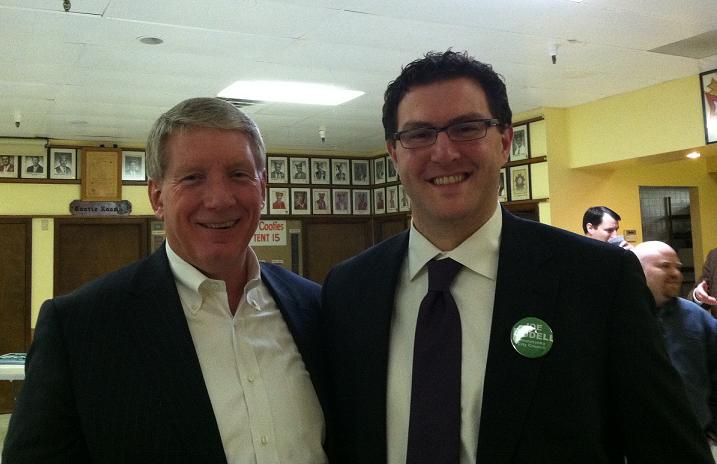 Joe worked on then-State Sen. Steve Kelley’s gubernatorial campaign in the 2006 election cycle. Although that effort wasn’t successful, it made for one of the more exciting party conventions in recent memory and inspired many across Minnesota with a sharp focus on education and transit, two issues with which we still find ourselves struggling today.

At the local level, we need to work with county and state officials to make sure those same issues are addressed in positive, forward-thinking ways. As a member of the City Council, Joe will work hard to make sure the transit projects coming in the near future bring the best possible outcomes for our neighborhoods and local economy.

Early Voting and Absentee Voting Information from the city of Minnetonka is available here.